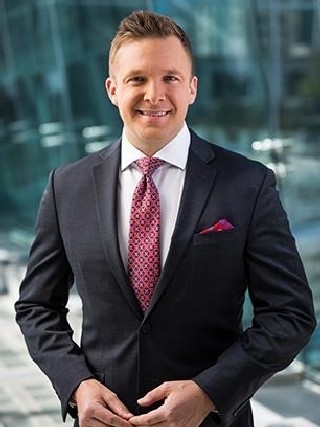 Jim grew up twenty minutes outside Detroit, Michigan or as he calls it ‘the mitten.’ He spent the majority of his upbringing playing ice hockey. In 2002 he hung up the skates when the pursuit for a Division 1 college hockey scholarship ended after one season with the Cedar Rapids Rough Riders of the United States Hockey League.

In 2006, he graduated from the University of Michigan and moved to Southwest Florida to start a three-year career in the financial services sector. He enjoyed the work but had a different calling. In 2010, he was a participant in a nationally aired documentary, REPLAY, about his high school ice hockey days. He credits that experience to make the leap of faith to pursue a larger calling and enter the broadcast journalism world.

Jim started reporting at a local 24-hour cable station in Sarasota, Florida. Two years later, his second stop took him ninety minutes south to Fort Myers, Florida where Jim was an anchor and investigative reporter. His work was recognized by the Florida Associated Press and Suncoast EMMYs. Jim has won five Regional Edward R. Murrow Awards and a National Edward R. Murrow Award for a report on the dangers of fluoroquinolones, a powerful family of antibiotics.

Jim spent the last three years in Memphis, TN as an anchor and Chief Investigative Reporter where his work was recognized by the RTDNA, Mid-South EMMYs and Tennessee AP Broadcasters. Jim, his wife and two young children enjoy traveling. Jim holds an FAA pilot license and enjoys reading, playing guitar, turning wood projects on the lathe and adding to his pre 1960’s Coca Cola collection.